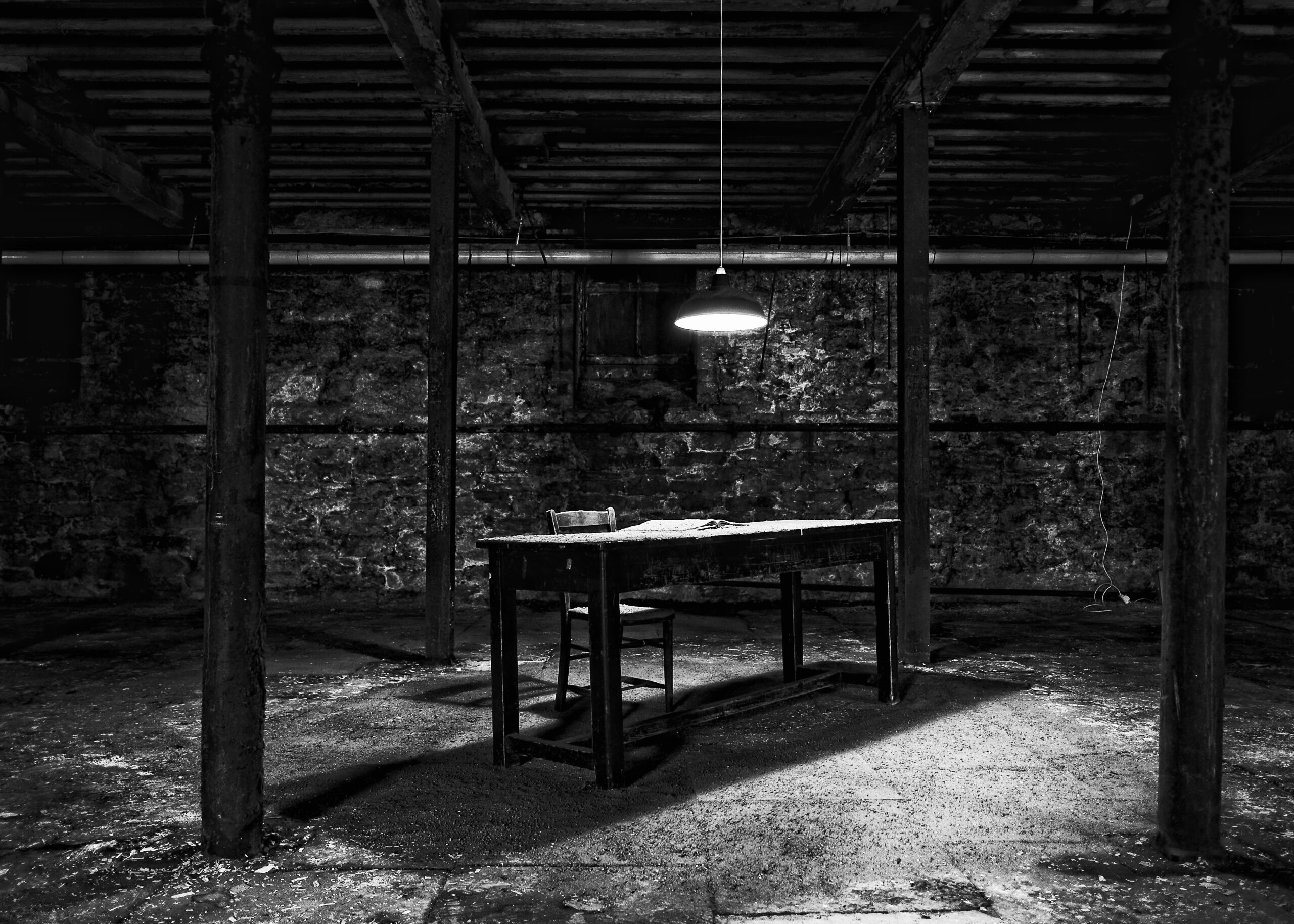 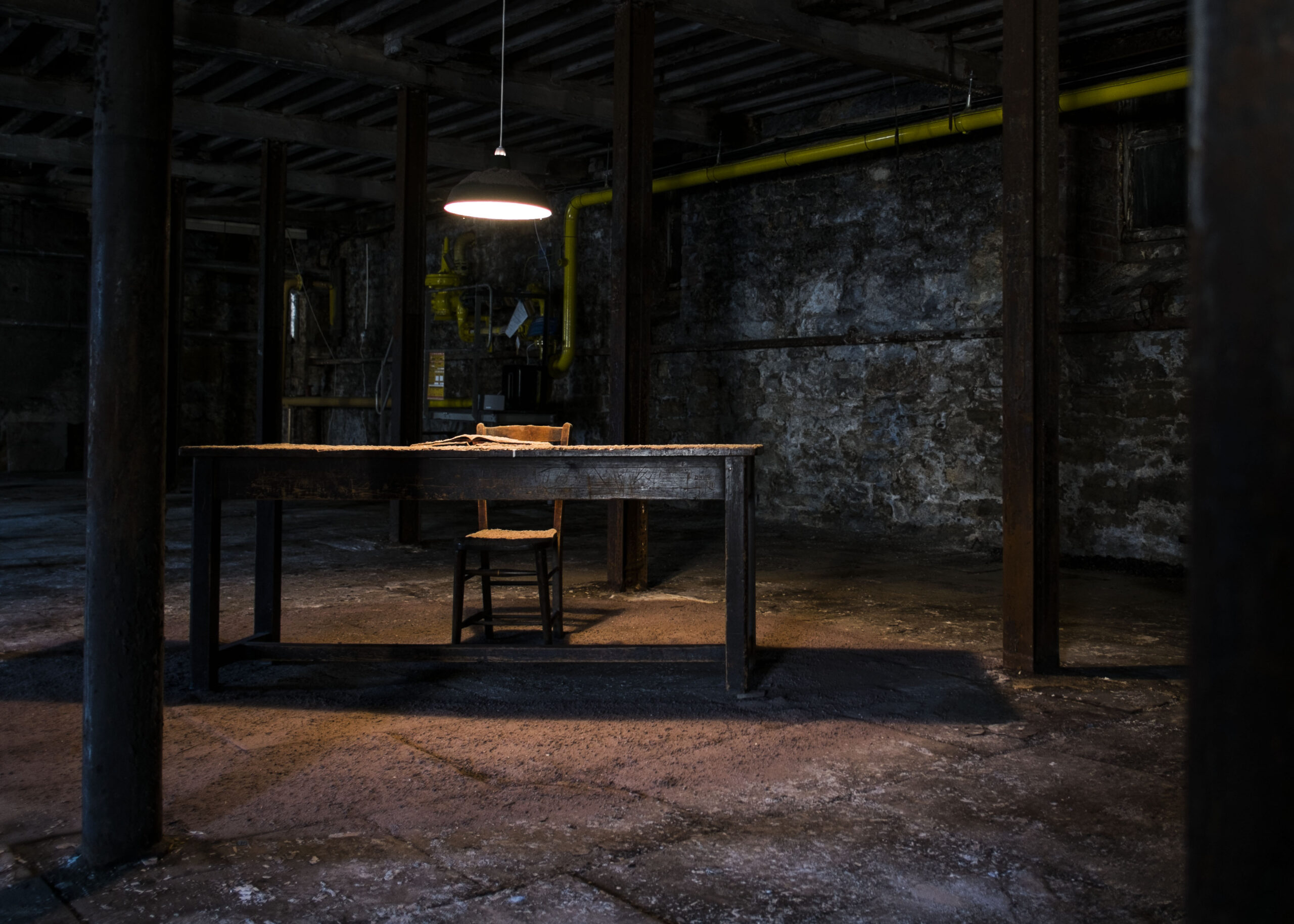 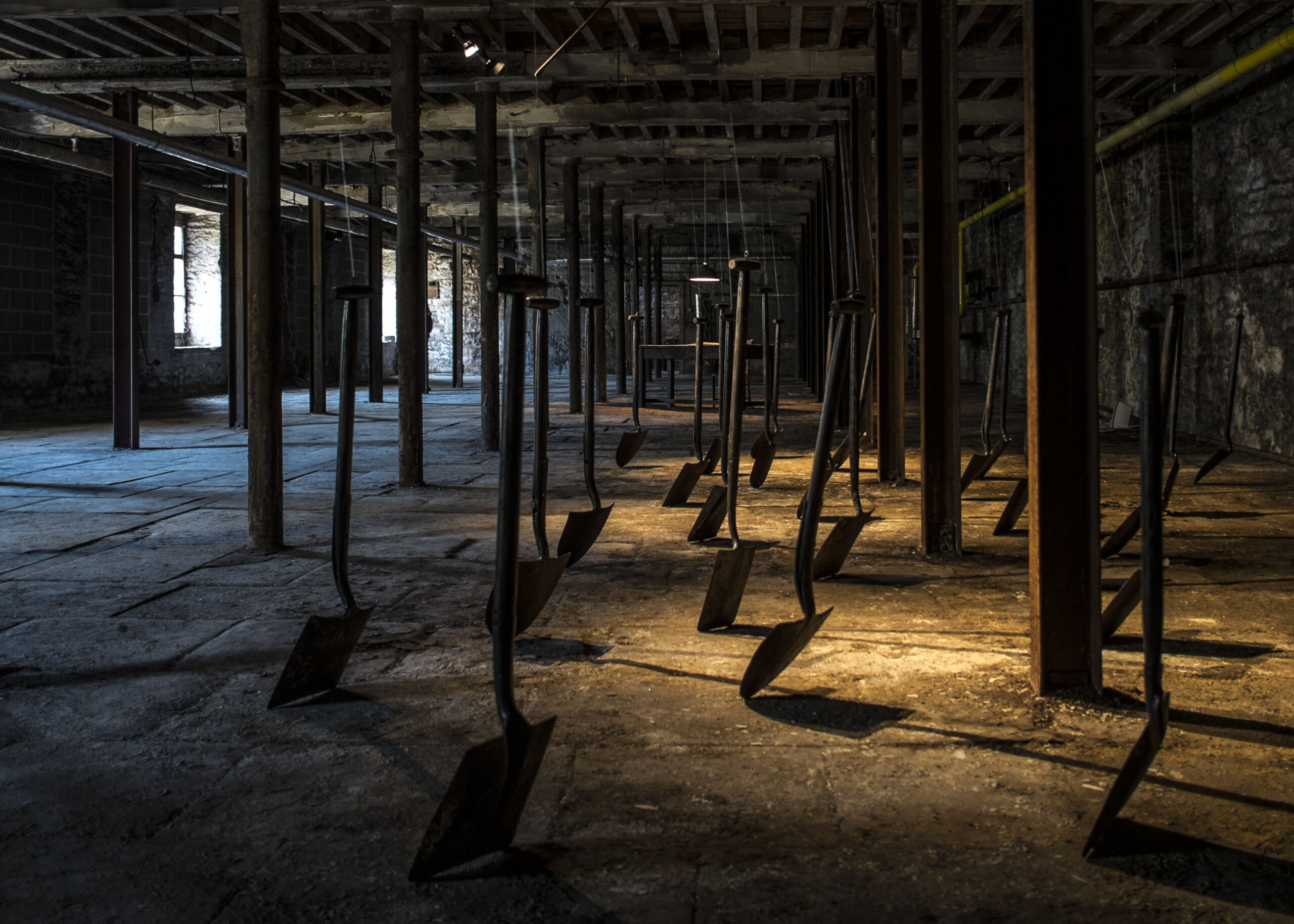 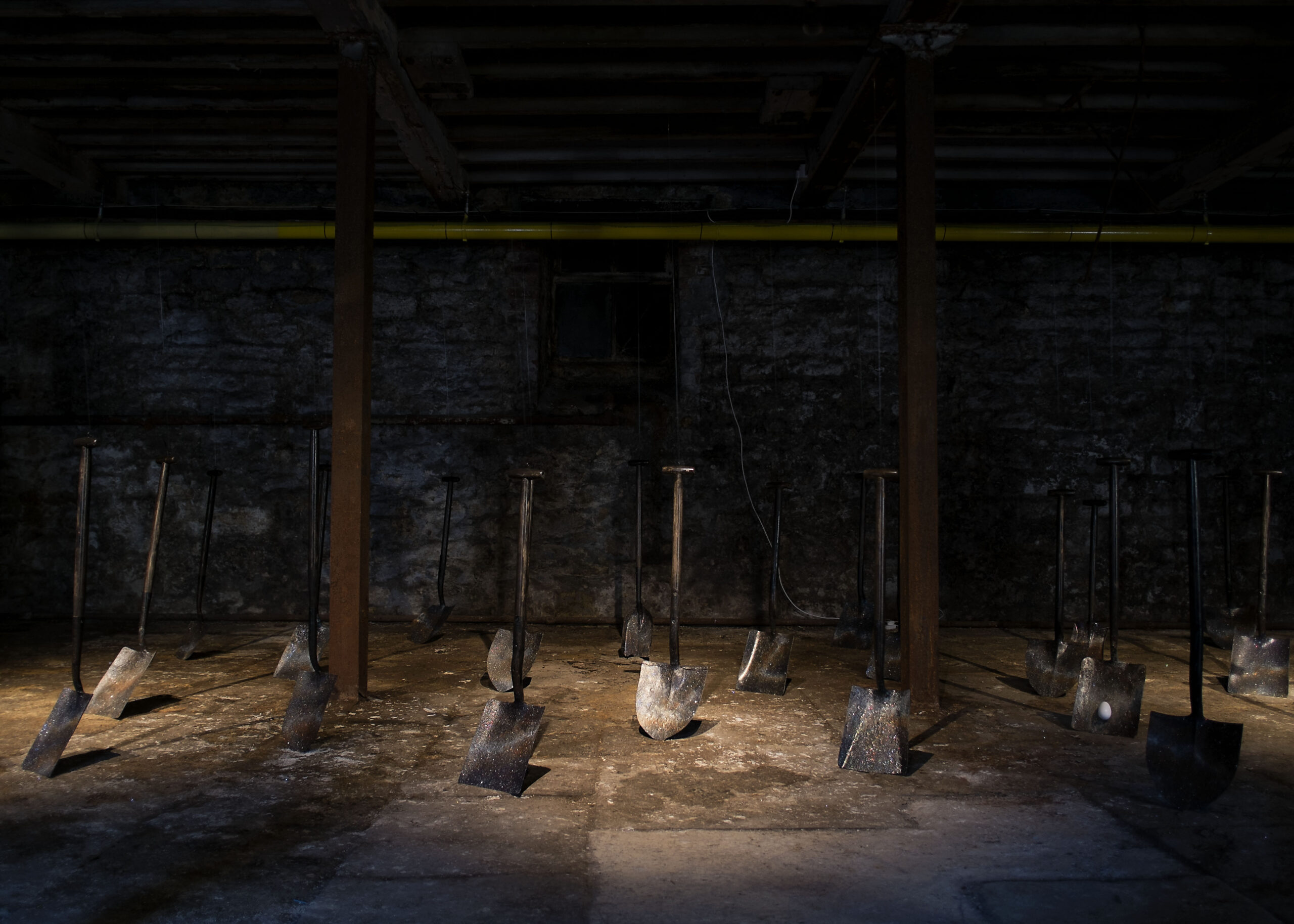 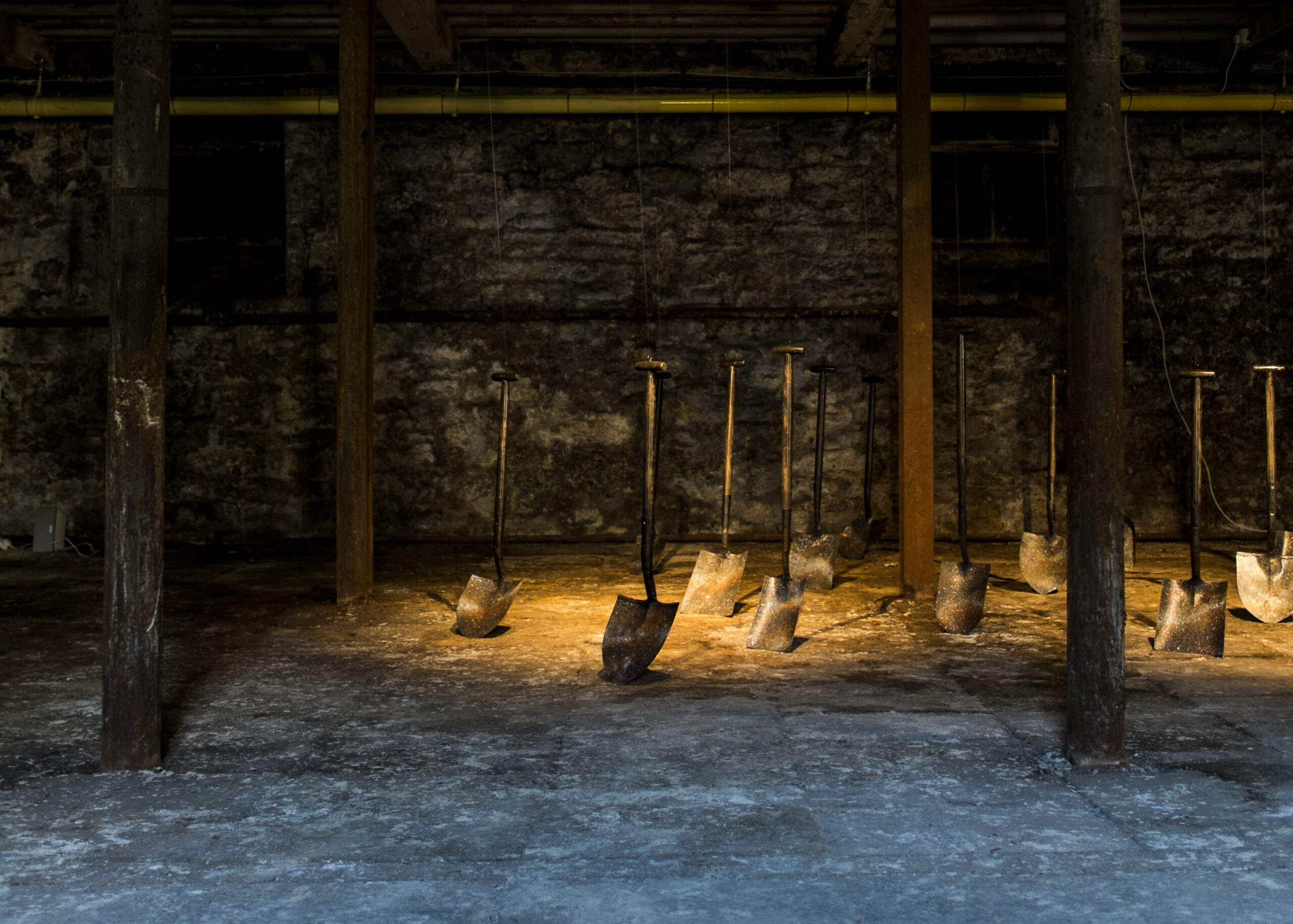 Installation by Russell Mills and Michael Fearon Table, chair, book, glass, ashes, light bulb, lampshade, rhinestone diamonds, painted spades, lighting, multi-channel 12 speaker sound system In these increasingly fragmented times life is a constantly changing collage of dislocated experiences. In our daily travels, we overhear snatches of conversations and clips of music, catch signs and headlines, meet people, exchange information and gossip, glimpse fleeting vignettes of human activity, all the while absorbing facts, ideas and sensations. The media world and politics, both shaped by advertising’s fabricated fictions, bombard us with mediated ‘truths’, preempting any original responses to experience. These experiences – our ‘reality’ – when recalled, do not unfold objectively or coherently, but as a series of meandering, disparate and jumbled memories, filtered, by jolts and twists, through association and deviation, to produce a montage of fragments, a collage of our consciousness.
My work uses and is about collage, not just in the creation of art that juxtaposes disparate elements in new contexts. I enjoy complexity and ambiguity. Proceeding through a cat’s cradle of associations I usually seek to find correspondences between numerous seemingly unrelated ideas, inspirations and facts, to reach a coherent, if allusive, conclusion. The works normally evolve through a symbiotic exchange between contextually anchored ideas and physical processes, each, by degrees, influencing the other.
However, for Now Then I decided to allow the notion of consciousness as collage to dictate the content and direction of the work in a far less discriminatory and far more porous way. Abandoning any attempts to corral ideas into a coherent whole, acting merely as a receiver, I have surrendered to the dynamics of their flow. Avoiding the constraints of analysis and interpretation, I have simply juxtaposed seemingly unrelated ideas and subjects that have preoccupied me over the past few years, into a new configuration.

Zoned in a cone of light – a chair and a table with an open book (ledger? Daybook? Noctuary?), covered in ashes – alludes to my father’s experiences, the physical actualities and my speculations on his thoughts, as a rear gunner in a Lancaster bomber, frozen with fear and cold in his turret amidst the chaos and carnage, as he flew on numerous raids over Europe during World War Two. It also references aspects of Samuel Beckett’s three zones of consciousness as described (hilariously) in his first novel Murphy (1938).

The first, outer zone of light and the colossal fiasco of the external world; the second zone of half-light, a filtering space in which human relationships are considered, decoded and moderated; and the third zone, a dark inner sanctuary of attunement, aspirations and escape. The ideas of Robert Fludd, Johannes Kepler and Galileo and the conflict that these caused with the Catholic Church are suggested in the spades painted to resemble constellations, and in the use of diamonds, a form of carbon, the most ubiquitous element in the universe, the material of the stars and of us. Diamonds also refer to Virginia Woolf’s receptiveness to the potential of the disregarded as expressed in her “diamonds in the dust”, her exploratory writings, which finds echoes in the work of Kurt Schwitters. In his startlingly poetic collages made with society’s detritus, phonetic poems and innovative Merzbau sculptures, he defined the creative process not as a separate sphere, but as intimately linked with everyday life as a process of organic transformation.

The egg plays with conjoined ideas about Galileo’s discovery of the true ellipsoid trajectory of the Earth around the Sun, challenging previously held beliefs about planetary motion, and the differences between myths and scientific facts. The egg, a true virgin, an innocent, an undeniable given, confounds the unfounded tenets of religious belief systems. In the Summer of 2013, a visit to the remote 17th century Martindale Old Church, on the east side of Ullswater, to hear The Gladly Solemn Sound singers perform their repertoire of West Gallery or ‘Shape-note’ music from the Georgian period, moved me enormously. In particular, a funeral hymn with music by William Knapp and lyrics by Samuel Crossman (1753). As this poignantly beautiful song of grieving, delivered with such passion in this simple, atmospheric building, unfolded its waves of voices, I was overwhelmed with vivid memories of and a deep longing for my father. He had died in 2011 at the age of 91.

He loved singing and I knew that he would’ve reveled in this sound, this place, and this moment. A spade implies digging – deeper – to reveal hidden truths, and the agri-cultural bond between man and the land as declared in Seamus Heaney’s famous poem ‘Digging’, in which the pen with which he digs for truths metaphorically mirrors his cultural heritage that is rooted in the land. The spade also refers to an important sermon by the 14th century radical ‘hedge preacher’ John Ball who influenced the English/American political activist, philosopher and revolutionary, Thomas Paine (1737-1809). Using the ‘common tongue’, Ball appropriated the bible to attack the church, the lords and the onerous flat-rate poll taxes imposed to pay for the recurrent European wars.

His speech, “When Adam delv’d and Eve span, who was then the gentleman? From the beginning all men by nature were created alike, and our bondage or servitude came in by the unjust oppression of naughty men…” calling for the peasant class to rise up against inequality and serfdom led to the Peasants’ Revolt of 1381. The depiction of Adam ‘delving’ is a common motif in pre-Reformation art and adorned the walls of many country churches.

The soundwork for Now Then is an aleatoric piece that employs six sound sources, each carrying a unique menu of sounds and silences, each programmed to play randomly through six sets of paired speakers, thereby creating a continually changing, self-generating mix in real-time. When using this method we have usually employed audio elements that are not pitch-specific – found organic and industrial samples, field recordings and electro-acoustic sounds. Using ‘My Life’s A Shade’ as a melodic reference obliged us to study various musical theories and devise a new process for the distribution of its tonal elements. In our previous installations, the inclusion of any musical element limited us to only one musical key, with this method the listener experiences the “feel” of seven keys. Russell Mills, February 2015