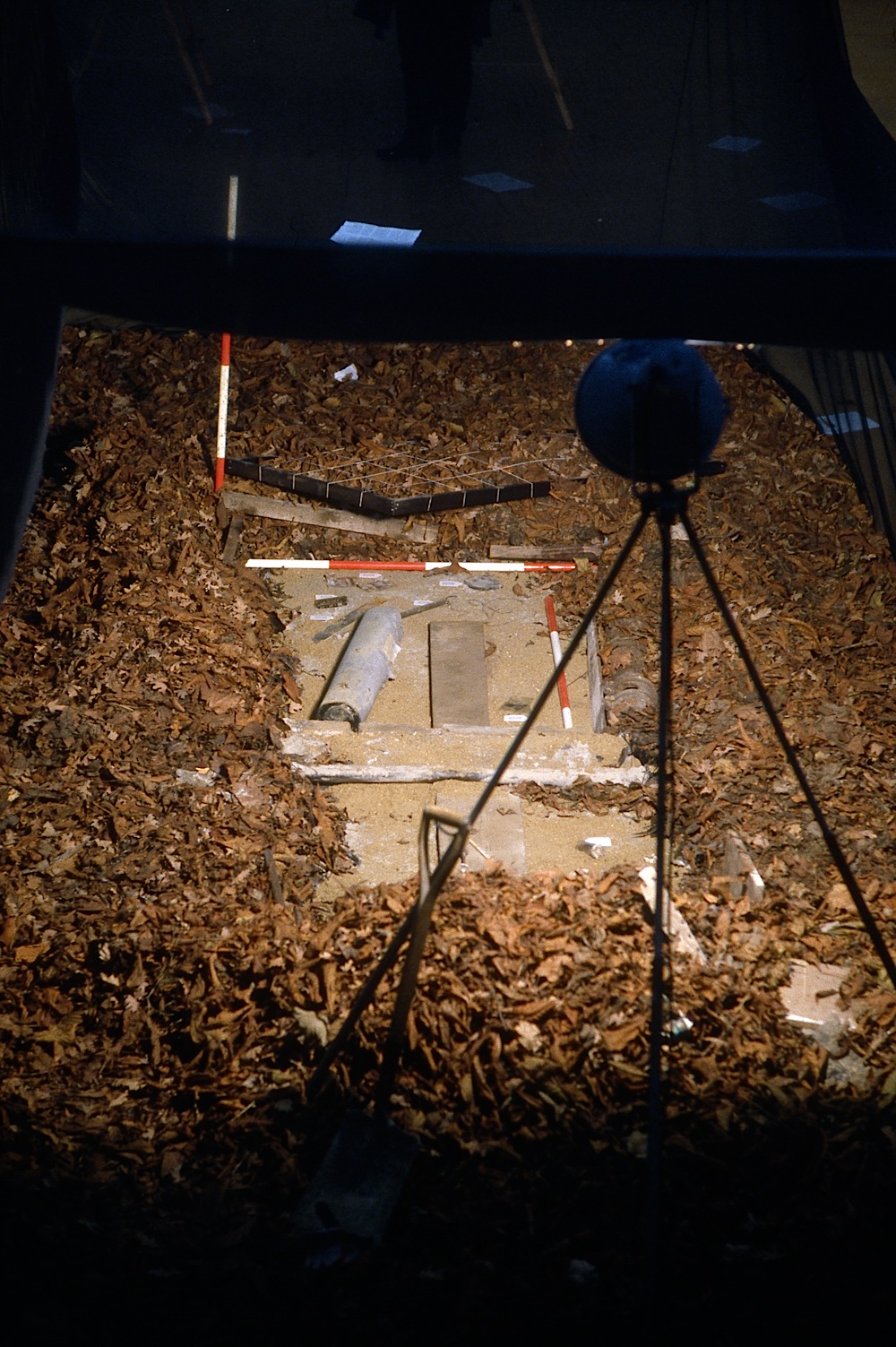 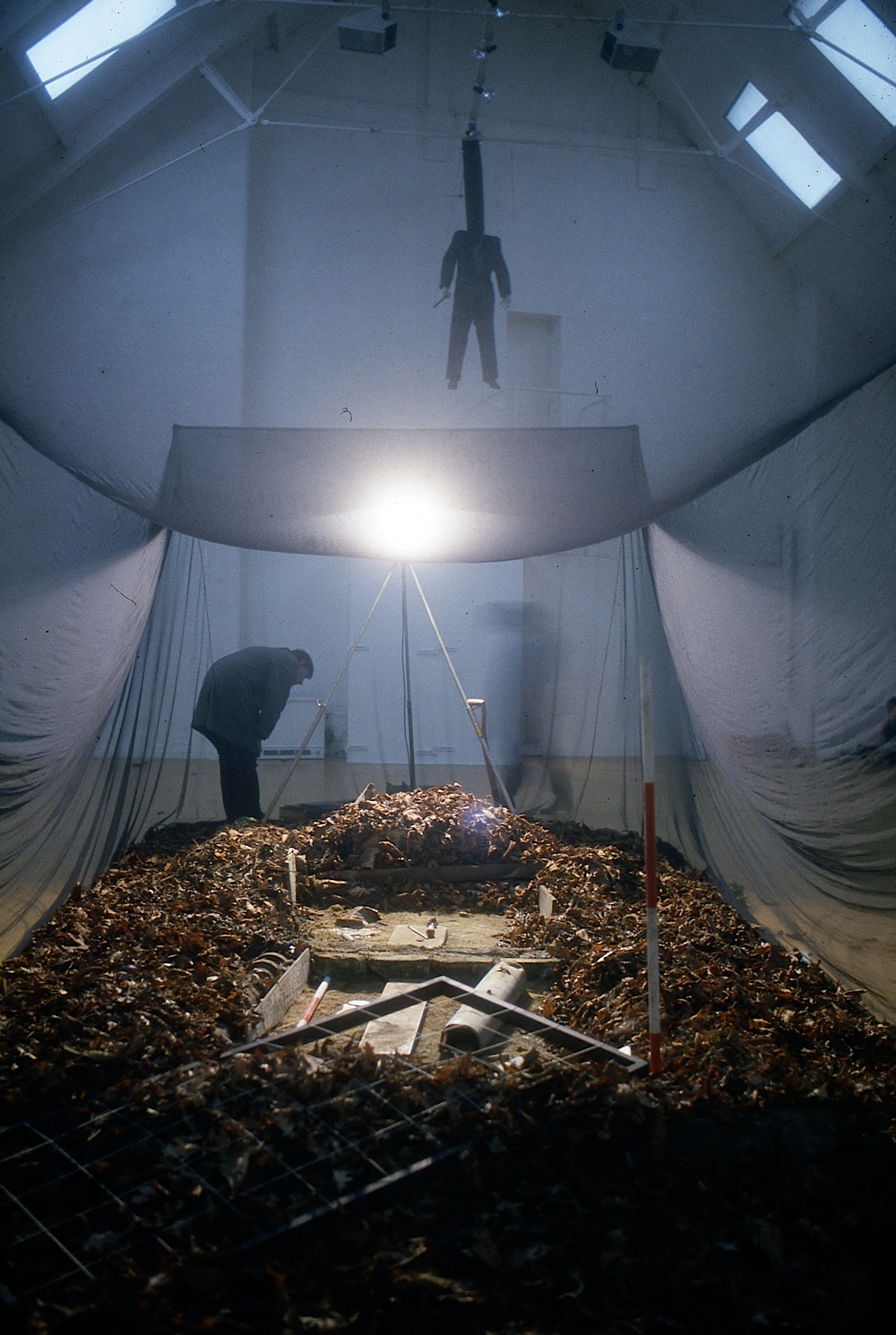 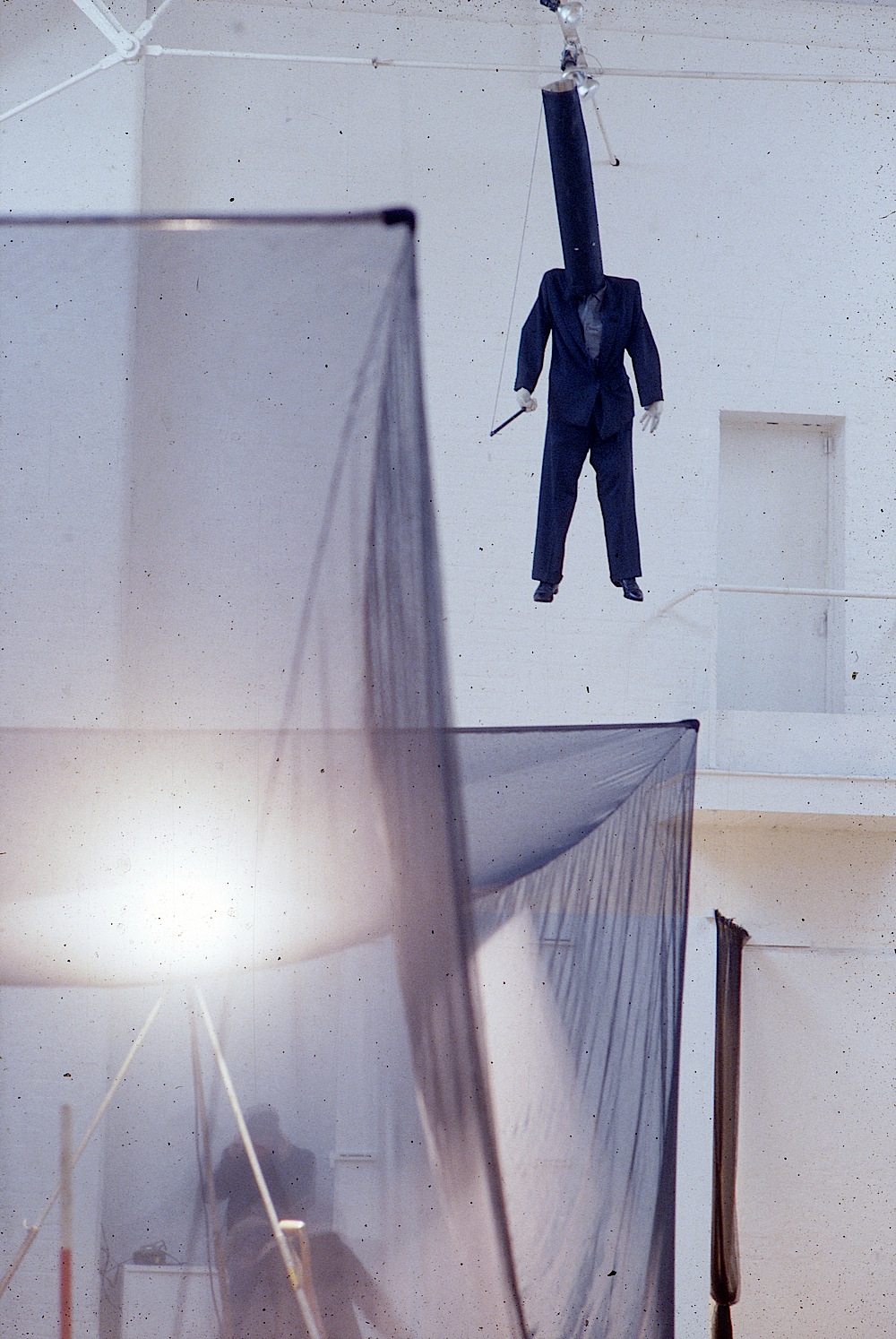 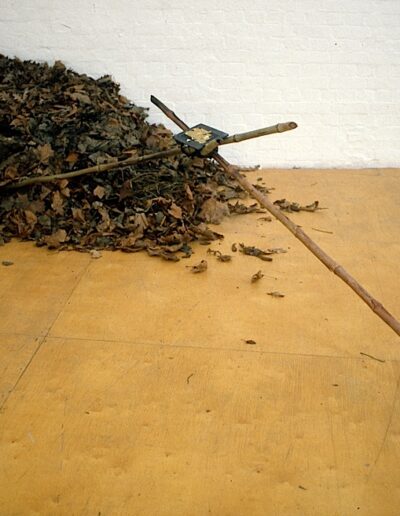 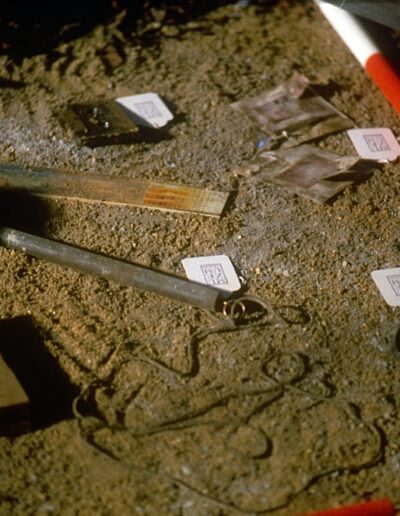 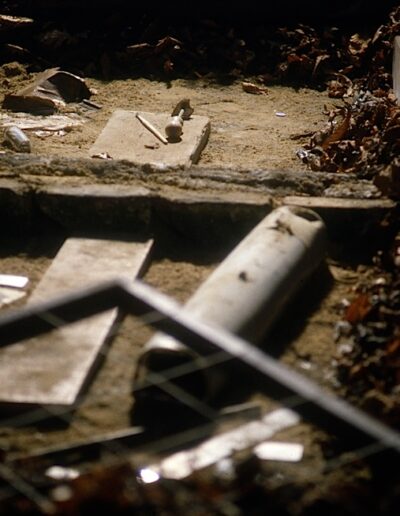 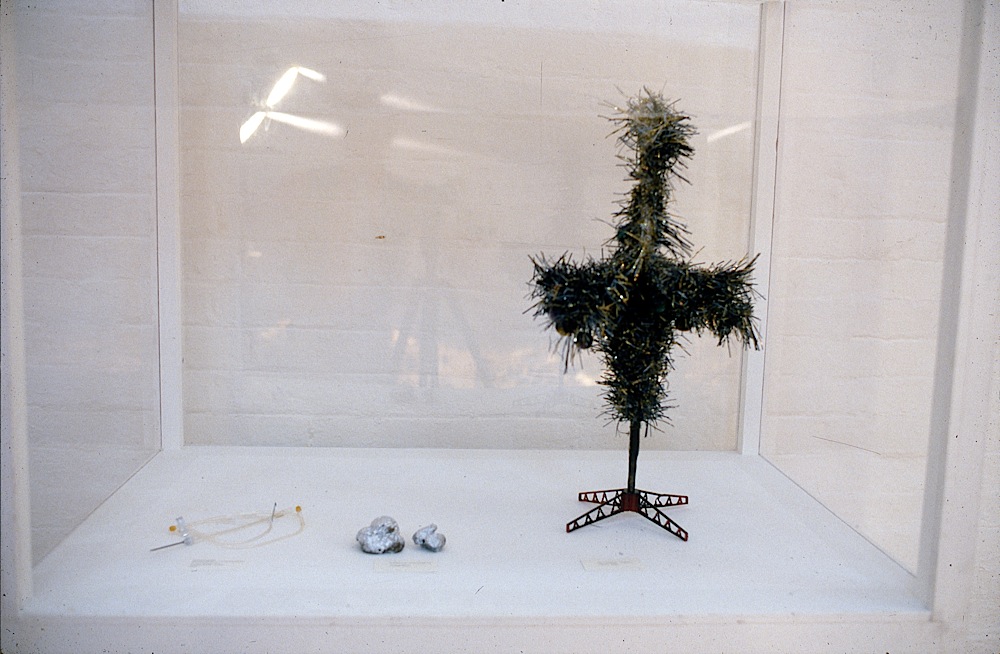 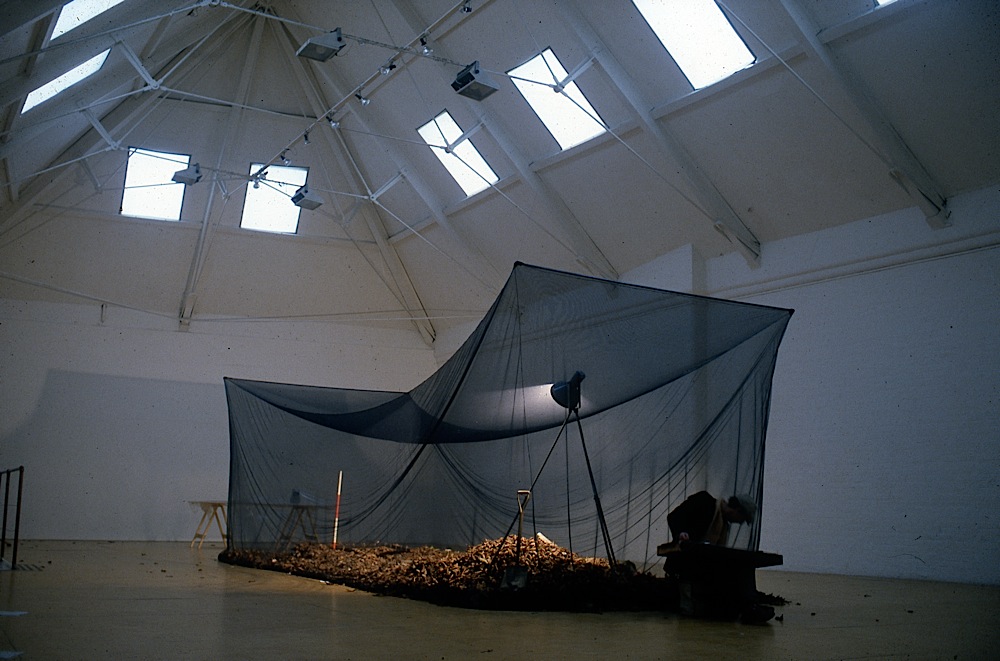 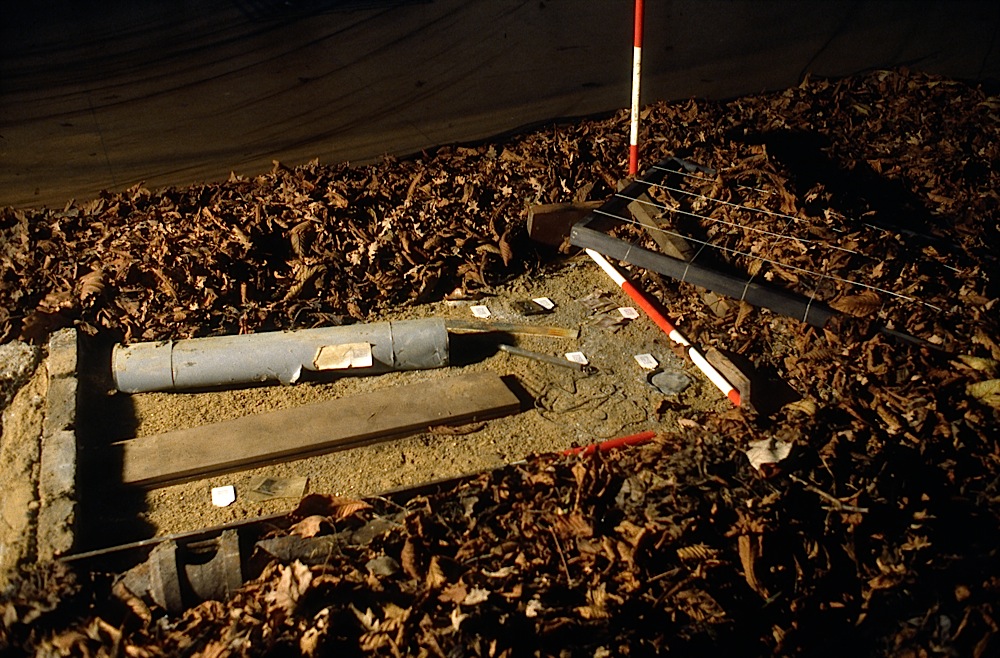 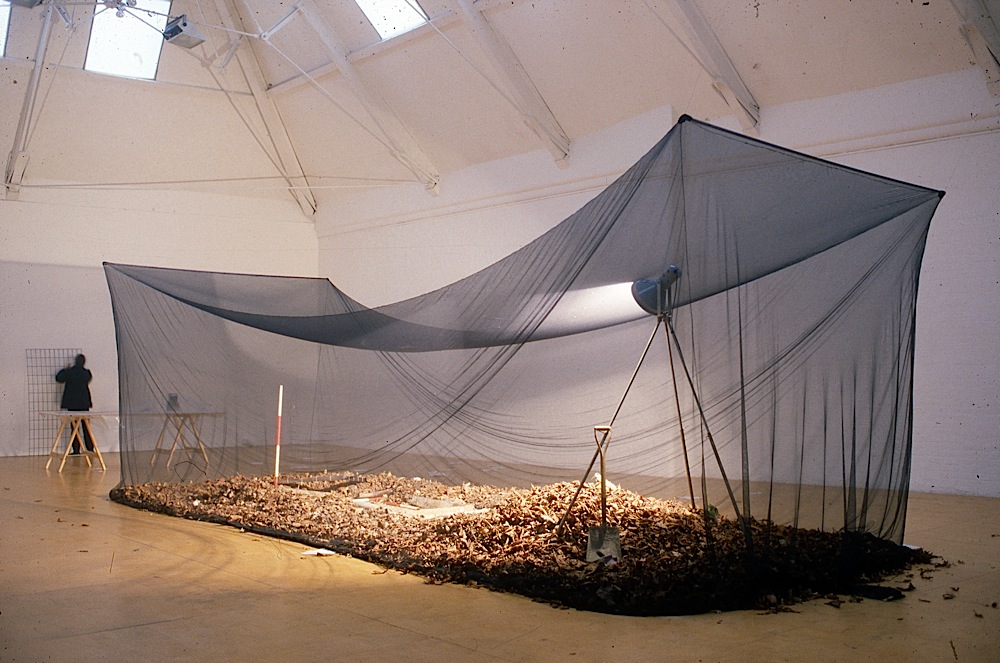 Site-specific recording installation/intervention by
Bruce Gilbert, Graham Lewis and Russell Mills, Netting, Arc lamp fitted with slow strobe, earth, leaves, the “Hanging Man”, invented archaeological “finds”, trestle tables and a surround-sound system. On the first floor of MoMA, a museum with no collection, Gilbert, Lewis and Mills, seeking to pose questions about art, art ownership, museums and collections, created a mock archaeological excavation in order to search for the Museum’s lost art.
For two months they visited the Museum once a week, bringing new “finds” that were “buried” in the site to await discovery. A new sound work was made that exploited the huge resonance of the gallery and in particular of the false floor, with speakers placed face-down under mounds of leaves at each end of the gallery. For one day during the installation’s duration, the musician Michael O’Shea (rectified electronic zither and effects) took up occupancy as resident busker. Wishing to critique the art world’s self-serving myopic view of culture, its slim understanding of art history and its snobbish elitism, Gilbert, Lewis and Mills also persuaded MoMA’s Directors to allow them to showcase the work of a young unknown local artist who they felt deserved attention.

Using Selloptape to collect dust and detritus from the floors of the Museum, Mills created hundreds of 35mm transparencies. These, along with invented titles and descriptions of the work, exaggerated dimensions, nigh-on impenetrable interpretative texts and a wholly fictitious artist’s biography, were prepared and presented to the Directors for their consideration. They were impressed and agreed to the proposal to set up an area of the gallery as a space to present this new Wunderkind of the art world, whom Gilbert, Lewis and Mills had named Eric Bostick. His mixed-media “paintings”, projected up to 10′ x 8′, revealed an extraordinary world of wonder: delicate calligraphic lines weaved and arced gracefully over exploding galaxies flecks of bright colours flashed from dense rolling storm clouds. A biography pasted to the wall informed the public that Bostick, having graduated without distinction from Didcot College of Art, had worked, for just three weeks, for South Oxfordshire District Council highways department maintaining street furniture and painting white lines on roads.
This was followed by his tenure as the first artist in residence on the ill-feted Spirit Of Free Enterprise ferry between Dover and Calais.