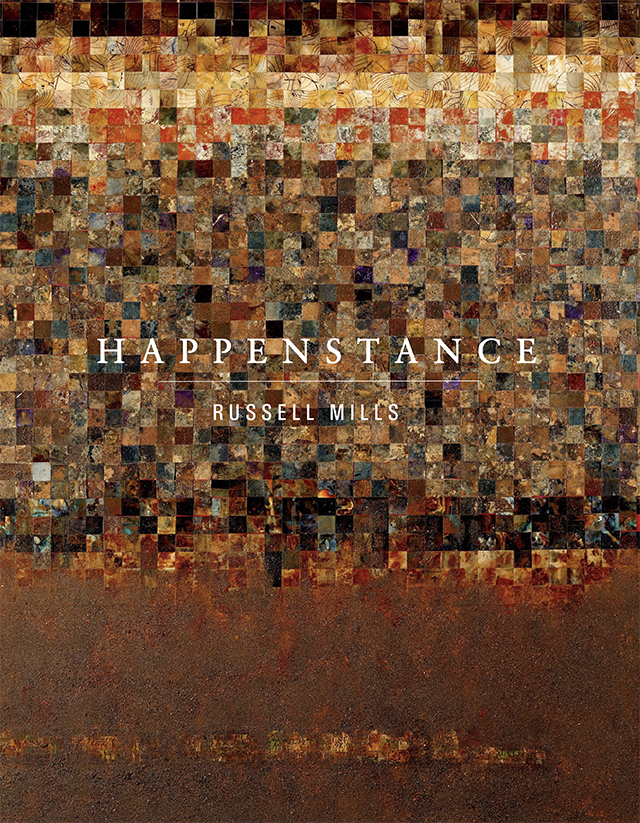 HAPPENSTANCE: by Russell Mills
With a new immersive soundwork by Mills and Mike Fearon

2 September – 6 November 2019
at Brantwood, home of John Ruskin 1872-1900
Created for Brantwood’s series of events celebrating the bicentenary of John Ruskin’s birth, and informed and inspired by ideas of contingency, chaos and order, surrender and control, Mills will exhibit mixed media works and a new multi-channel sound work..
Contextually anchored and process-driven, Mills’ work uses metaphorically charged materials and alchemic-like processes of slow and unknowable transformation. Shaped by evaporation, sedimentation, crystallisation and chemical reactions, they celebrate the weave of order and chaos, as diverse matter is either broken down into entropic confusion or necessarily arranges itself into a cohesive order.
Following Ruskin’s advocacy of close observation, ‘imagination by combination’ and ‘accidental association’, Mills creates works that, being analogous to the ceaseless flux of nature’s generative processes, mirror and explore many of Ruskin’s most significant ideas about the natural world: as matter, as force, as school, as metaphor for transformation, and as being profoundly political and economic. Using Brantwood itself as its source, Mills and Fearon’s new sound installation transforms Ruskin’s world into the sonic. In the spirit of Rimbaud’s synaesthesia, layered recordings made in the house, its surrounding landscape, and from above and within Coniston Water, augmented by melodic patterns derived from the prelude to Elgar’s ‘The Dream of Gerontiius’ and Ruskin’s own ‘airs’, the work telescopes time to create a uniquely evocative portrait of place.
Russell Mills (born Ripon, Yorkshire, 1952) studied at Canterbury and Maidstone Colleges of Art, and the Royal College of Art. Mills’ pioneering practice spans media, encompassing mixed media painting, site-specific installation, sound, film, design, visuals and lighting for contemporary dance and music, and writing. His interdisciplinary approach has also led him to work with some of the most influential cultural figures of our time, producing album covers for the likes of Brian Eno, Nine Inch Nails, David Sylvian and Peter Gabriel, and book covers for Samuel Beckett, Ian McEwan and Milan Kundera, amongst many others. He has exhibited and created his immersive multimedia installations internationally. Juxtaposing traditional art materials with chemicals and organic matter, his work, morally and philosophically, exemplifies rare integrity. Mills lives and works in Ambleside.
Happenstance opens on Monday 2 September, then every day in the Severn Studio at Brantwood, 10.30 am-5.00 pm. Admission is included in the house or garden ticket. For further information please contact Brantwood, Coniston, LA21 8AD, Cumbria.  T: 015394 41396. Email: enquiries@brantwood-org.uk www.brantwood.org.uk
A limited-edition 80-page full-colour catalogue will also be available at the exhibition priced at £15.00 and can be ordered from Brantwood – Email: enquiries@brantwood-org.uk or via this website. There are also 25 signed copies at £25.00 each, which can also be purchased through this website.

A limited edition 80 page full-colour catalogue will also be available at the exhibition priced at £15.00 and can be ordered from Brantwood – Email: enquiries@brantwood-org.uk or via this website.
There are also 25 signed copies at £25.00 each, which can also be purchased through this website from 1st September

During the last few years, Mills has had numerous enquiries from people asking if there are any prints available of some of the artworks that he’d made for use on album covers by the likes of Japan and David Sylvian, amongst others. Apart from prints of works made for various Nine Inch Nails projects, there have been no others made- until now.

GONE TO EARTH (David Sylvian)
Limited edition print of the complete mixed media painting made for use on the gatefold album cover of David Sylvian’s Gone To Earth double album of 1986.  The print, has been made from a high-resolution scan of the original 5” x 4” colour transparency of the actual painting used for the album’s cover, hence the slight difference in colour to that of the originally produced album cover.

For more information on Gone To Earth click here

EXCORCISING GHOSTS (Japan)
Limited edition print of the complete mixed media painting made for use on the gatefold album cover of Japan’s compilation double album Exorcising Ghosts (1984). The print, has been made from a high resolution scan of the original 5” x 4” colour transparency of the actual painting used for the album’s cover.

TROPHIES (David Sylvian)
Limited edition print of the complete mixed media artwork made for use on the outer cover and folds of the book Trophies: The Lyrics of David Sylvian (1988).

WARM JETS (1985)
Lithography, hand addition of rubber stamp and pearlescent nail varnish.
Produced in an edition of 150 to accompany the limited edition of the More Dark Than Shark publication by Russell Mills, Brian Eno and Rick Poynor, Faber and Faber, London (1986).
10 artist’s proofs are available to purchase (from an edition of 15), numbered VI/XV to XV/XV
Each print is signed and numbered by the artist.
Size h x w: 24 x 26 cm unframed.
£250.00 plus P&P

EXTENDING WINGS (2000)
In 2000 Mills was invited to spend a week in the Printmaking Department at John Moores Liverpool University, with the intention of experimenting towards a new work. The result was Extending Wings, a combine print using lithography, silkscreen, embossing, with hand additions of acrylics, etching varnish, aluminium paint, rubber stamp and foam on two sheets of handmade paper. From the original edition of eight only four are available to purchase.

P&P costs are dependent on destination, and will be given on individual orders.

The works in both series were created using and capitalising on paints and other materials that had seeped under other works in process, onto their cardboard support surfaces. When the primary works were removed, visible traces of their making were revealed; a surprising array of unpredictable marks, seemingly random colour mixes and new forms. These happy collisions and collusions of instinct, accident and expression, prompted me to consider employing a kind of forensic examination of the vestiges of what remained and use them as pointers to suggest and direct the making of some new, purely abstract works; ego-less and devoid of any representational triggers.
The title Respair is a rare and sadly obsolete word, coined by Andrew of Wyntoun, a Scottish poet and chronicler who lived between c.1350 and c. 1423. It means “the return of hope after a period of despair”. A sublime word, it seems appropriate to both the works themselves, born as they were, out of unconscious gestures and their unforeseen consequences, and as a heartening and optimistic response to the increasingly uncertain and stressful times we’re living in. Perhaps the time is right to rescue “respair” itself from the darkness.

Second Thoughts, the set of miniature abstract works Mills produced during the Covid-19 lockdown in 2020, surprisingly and gratifyingly, sold out very quickly. However, due to their limited numbers, there were many people who were disappointed in being unable to acquire one. Since that time he has received numerous enquiries as to whether he might consider producing another series, and so, following the same thinking and processes as employed in the first, he has produced another set of 30 tiny works, which are now available to purchase.

The artworks, made using used include oils, acrylics and watercolour, metallic paints, rust, etching varnish, and varnish are all different sizes. All are in matt black unglazed frames measuring 23 cm high x 17.5 cm wide. Each is signed and numbered on the reverse, and are available to buy at £150.00 (UK Sterling) plus tracked and signed post and packing.